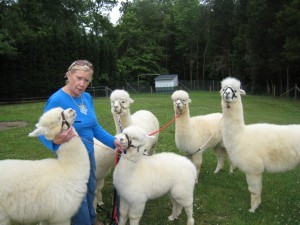 Susan and I have very different backgrounds, but in a way, very similar, due to the era when we were raised.

Susan was born in Djbouti, Somalia and raised in the West Nile in Northern Africa. Her parents “English and Scottish were tobacco farmers in the West Nile after the war. Susan was trained as a cosmetologist in London and continues to practice her profession three days a week in Welcome, North Carolina.

I (Timothy Planer) was born in the mid-west on a farm with cattle, and where we grew grain, fruit and a small dairy operation. Moving to Florida at seventeen and began a forty two year career working in the electric utility business in many operations positions.

Retiring in 2006 and moving to NC in early 2008 where Susan and I started Palomino Alpaca Farm Inc in the fall of that year. Since that time we have mainly focused on growing our herd of mainly white Huacaya alpacas from two maidens, to our herd of twenty-one today.

Your shopping cart is empty
Visit the shop