From Bottle Fed to Grazing

From Bottle Fed to Grazing 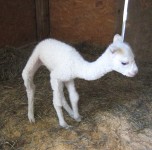 We are into the 350th bottle feeding of “Arjina” the son of Rolex (Magical Farms herdsire). It is difficult but doable, our first experience with the dam who had milk, but would not accept the cria who could not stand, Arjina was 5 weeks early, and totally unexpected for early arrival. Thanks to Dr. Mark Hamerick who was able to milk out some of the colostrum and tubed it di-rectly into his stomach, Arjina is still with us and gaining weight. I then learned that milking an alpaca is much different from a cow, but if we were to help him survive we would need to do it until we could get some goat milk and a bottle. Feeding him small amounts of the colostrum by syringe every two hours seemed to work and he eventually was able to hold his head up, but it was three days later before he could stand on his own. The dam was not interested in the cria who could not stand, and would not allow him to try and nurse, 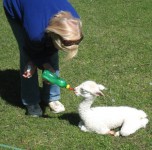 then she would not let the milk down. To make a long story short, Queen Ann (dam) loves her baby but no longer has milk. At six weeks he has doubled his birth weight of 13.8 lbs, and is running around with the others like a normal cria. His weight gain on the diluted goat milk and multi species Milk Replacer is slower than normal, but is currently taking about 50-60 ounces daily, well above the 15% of his body weight. His crooked legs and abnormal hip position have all disappeared and he looks to-tally normal and very active. Sue and I are in our fourth year of the alpaca business, starting with just two maiden females, and now we have a small herd of twenty. Our recent experiences have added some real time knowledge and understanding of these wonderful animals. As of the date of this writing (May 10) Arjina is 47 days old and is getting interested in feed, grass and hay, that may help stabilize his digestive system. 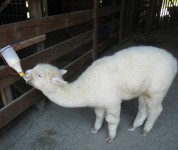 Arjina is 144 days at this time and is consuming on average 45 ounces of evaporated goat milk diluted 50% with water and 30 ounces of multi-species milk replacer daily. In addition Arjina is eating approximately 6+- ounces of Blue Seal Llama/Alpaca maintenance chow daily, along with orchard grass hay and grazing. His daily intake seems to vary with his appetite depending on amount of time spent in the pasture and the hot summer conditions.

Weight gain is less on the supplemental milk products than on the dam’s own milk as expected. His current weight is 55.8lbs, gaining 42 lbs over 144 days, or averaging 6.6 ounces of weight gain per day.

In the beginning feedings were 8x a day, and now we are at 5x a day, gradually expanding the window between feedings to encourage him to graze and eat chow and hay along with the other weanlings.

We have used a bottle holder to reduce the human connection at feeding time. After his bottle he usually seeks out his mom, wipes his face on her back and takes a nap along her side. Between meals, his day is with the herd in the pasture or in the barn under the ans with the other 13 members of the herd. His male antics are generally tolerated by most of the other females along with some corrective actions from others.

The real measure of our success will come when we take the bottle away at 6 months of age. We hope the gradual reduction in bottle-feeding prior to this day will make this adjustment less of an event. In addition, we usually insert small intermediate chow feedings during the day to curb the hunger, of the newly weaned crias, and we plan to continue this practice with Arjina.

Your shopping cart is empty
Visit the shop